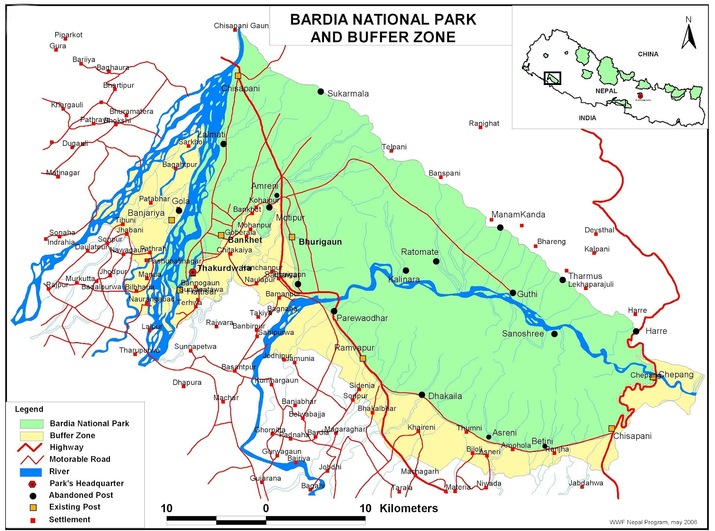 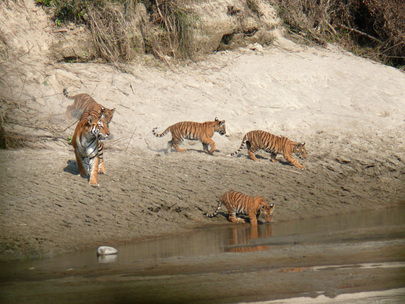 Bardiya lies in Bheri zone in the mid western region of Nepal. It covers 2025 square kilometers and lies west of Banke district, south of Surkhet district, east of Kailali district of Seti zone. To the south lie Uttar Pradesh, India; specifically the Lakhimpur and Bahraich districts of Awadh.
Most of Bardiya is in the fertile Terai plains, covered with agricultural land and forest. The northernmost part of the district extends into the Churiya or Siwalik Hills. Bardiya National Park covers 968 km2 occupies most of the northern half of the district. This park is the largest undisturbed wilderness in Nepal's Terai. It provides forest, grassland and riverine habitat for engendered mammal, bird and reptile species. More than 30 species of mammals and more than 250 of birds have been recorded.
Most people living in this district are farmers. The district headquarters Gularia lies on the Babai River. The Karnali, one of Nepal's largest rivers, divides into multiple branches when it reaches the Terai. The westernmost branch forms the boundary between Bardiya and Kailali districts. An eastern branch is called the Geruwa. The endangered Genetic dolphin was often seen in its waters, but populations have been declining

Activities is in Birdaya national park

Jungle Walk: Our jungle guide and wildlife tracker will take you to the jungle to point out the hidden life of the wildlife, where you can have wildlife experiences by walking safely, quietly, and leisurely through the forest as well as riverside, where you are sure to see many wildlife, naturally scenery and have great photographic opportunities.

Elephant Safari: is also the safest way to explore the wildlife up close. You will be taken into the bush and natural habitat of the quiet and beautiful jungle, which provides a different view of the park as one can go off the main trail as well as you, may have great opportunities to see the wild animals. Morning and late afternoon is the ideal time to go on a ride. We suggest you to take an elephant ride almost for three hours.

Bird Watching: In addition to the resident spaces, several migratory birds visit the park. Approximately over 400 species can be sight in the park and buffer zone area that is why Bardia is a paradise of birds as well. Where your walk will be on a sunrise through the jungle and along the river bank.

Jungle Drive: To explore the vast area, is also the way to observe the wildlife. You can cover the big area, stop the jeep and walk to the animal possibilities area as well as see the various types of forests and natural beauty and scenery.

Wild Rafting:  A full day’s wild rafting on the Karnali River is also the best way to observe the wildlife, which runs across the park. You will be stopped time to time in the animal possibilities area and observe the wildlife where even not possible to reach by walk, elephant, and jeep. Rafting on great opportunities to sight the river birds, Asiatic gangetic dolphin, crocodiles, insects, three big animals and many more living in the river system as well as a great fishing in the river.

Visit to Black Buck Sanctuary: It is Nepal’s most endangered antelope and is found only in Bardia district. So, the park is actively engaged in conserving the last remaining population of black buck surviving at Khairapur in Bardia outside the park. The area is about 35 km south from Thakurdwara, park headquarters which is especially created for them to increase its number and protect the habitation.

Fishing: Are you interested for fishing? Then why not try! Let’s head for the fishing. The karnali and Babai River are famous for Mahasheer (Golden Mahasheer), a King of the fish. Once you catch, you feel to leave them back into the river of its beauty and feeling of its own world.

Village Tour: A stroll though the typical local villages will be rewarding experience. The Tharu ethnic groups is native to this area, and are broadly divided into two groups namely Dangaha and Desauri. Where you can learn about their culture, daily lifestyle, traditions and many more. Your guide will be happy to tell you about these indigenous people. Traditionally they are subsistence farmers and practice their own tribal religious. Handicrafts made by the community members could be bought as souvenirs.

Culture Dance: The villages’ harbors multi ethnic groups with diverse culture, in which Tharus are the major attractions for tourism. The first settlers of Bardia, Tharu will show you the dance with the story of their own history, culture, traditions, activities, believes like Hurdunguwa, traditional stick dance, and so on. At the end of the dance, the guests are invited to join the dancers.

Crocodile Breeding Center: There is a crocodile breeding center at the park headquarter for Gharial and Marsh mugger to increase it’s number, which includes two major sections-hatchery and rearing sections. Eggs required for the hatchery is collected from sandbanks of Geruwa and Babai river systems. After getting enough bigger, are replace into the Karnali and Babai River.

Visitor Center: The visitor center has established at the park headquarter to provide the information about park, wildlife and its bio-diversity, and local communities residing in the buffer zone.

Tharu Cultural Museum: Tharus are the indigenous groups in Bardia district than other ethnic groups like Bhramin, Kshetri, and People from Mongoloid origin (Magar, Gurung, Tamang etc). So is standing to provide about their culture, living style, and many more. Its main purpose of establishing is to restore vanishing indigenous Tharu cultural heritage. This museum is decorated with needed all materials, like ornaments, foods, equipment, dress, mud made grain storage, husking machine, Tharus God etc. For this, you have to pay a little amount for management of the museum.

Camping: We organize a camping trip in community forests, which is a corridor for the wild animals. One can camp at the side of the karnali rive (a park boundary) with enjoyable place without even a generator, electricity, no air conditions, no fans but with some the nature wild mud, wild water, wildlife and feel the spirit of it. Sit, look and listen, you might see wild animals walking through, birds with melodious chirping, and many more.

Elephant Stable (Hattisar): Elephant breeding center is located about 3 km south from the park headquarters which is managed my park. The elephants are extensively used for patrolling and research activities. Since the Park Forest is inaccessible by vehicle during monsoon, the domestic elephant servers as a safest mode of transportation to cross flooded rivulets and move around water-logged areas. Elephants are also available to visitors for safari with a service fee.